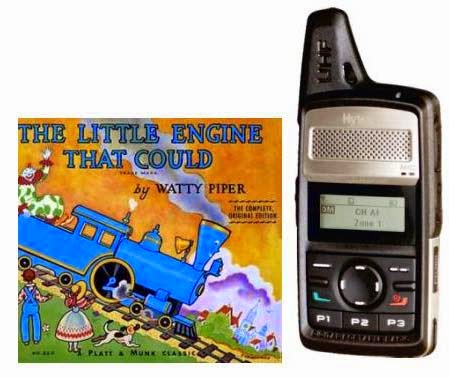 Remember the children's book, The Little Engine That Could? It was one of those stories of overcoming apparently impossible obstacles and winning against all odds. Now we have The Little Radio That Could.  It's called the PD362!

We got a call from a school principal the other day. His school  uses radios for bus loading, general administration, security, housekeeping, and maintenance. They had several problems. The current radios had dead spots (multi-building campus), the ladies (and the men too although they would not admit it) hated the current radios.  They were bulky with antennas designed to stick the user in the ribs. The batteries required frequent replacement, and the range had never been the same since narrow banding. But the BIGGEST problem was too much talking on a single channel!

Then we told them about the Little Radio That Could, the PD362, that could talk to the buses in the analog mode and PRIVATELY in the digital mode.  Not only could user groups talk privately, but all together when needed.  The lost range was recovered, the dead spots went away, the battery life was extended, and they had both voice and silent short text messaging capability.  Short text messaging gave administration personnel the ability to be notified and respond while in meetings.  And, the little radio really IS little, weighing in at less than six ounces with no stick in the ribs antenna! The Little Radio really COULD solve all their problems and it costs no more than their old analog radios.  Want to know more? Drop us an email to ServingU@falcondirect.com or give us a call at 800.489.2611. You'll be glad you did!
Posted by at 9:00 PM