At the 2009 International Association of Chiefs of Police (IACP) conference in Denver CO, police chiefs from all around the USA and the world were introduced to a dazzling array of high tech law enforcement tools. Communications was a hot topic as one of the leading manufacturers introduced next generation P25 pre-Phase II radios capable of operating in the VHF and the 700/800 MHz bands. One manufacturer, perhaps more, offered a Tri-Band radio that covers VHF, UHF and the 700/900 MHz band, but it apparently is not Phase II compatible. Truly, tomorrow is here today, or is it? What in the world is going on?
About the time that many of us thought we understood what we needed to know about P25 and interoperable communications, this Phase II thing comes along and we start hearing things like FDMA, TDMA, and all kinds of terms that are totally alien to the vocabulary of pubic safety professionals. So where do you go for some straight answers on communications planning?
We invite you to visit www.info4u.us/APCO25 where we have prepared some information that we hope you find to be useful, and as always, we are at your service! Just give us a call at 205.854.2611 or email sales@falcondirect.com if you have additional questions.
Posted by at 4:24 PM

Over recent decades, there has been an increasing quid pro quo relationship between government and large corporations. Actually it goes back much farther than that with partnerships between government and private enterprise to accomplish banking, essential manufacturing, communications, power, and transportation monopolies. More recently,organized labor has become a major part of this alliance, but that is a whole other subject.

When government/corporate relationships develop, we are generally told that an immediate need to stop doing what we were doing and immediately start doing something different is required as a result of advanced technology. Sometimes this is a good thing. Sometimes, it is a bad thing, and sometimes, it is difficult to make a determination. Such is the case with VHF versus 800 MHz communications. For over a decade (actually closer to two decades), we have been told that 800 MHz, and more recently 700 MHz, is "better" than VHF. No one ever quite got around to the specifics of why it was better. It just was/is.....

Then along came Jay Jacobsmeyer, a consulting engineer with advanced degrees and over 25 years experience in radio-frequency engineering. In the November 2009 issue of Urgent Communications magazine, an article by Mr. Jacobsmeyer was published which challenged the established conclusions of 800 MHz superiority. We think you might benefit from his comments, especially the comparisons in Table 2 and the last two paragraphs. You can read Mr. Jacobsmeyers comments on line at http://urgentcomm.com/networks_and_systems/mag/vhf-vs-800-mhz-200911/.

If you are deliberating on whether to move up to the 700/800 MHz band or simply improve what you already have, we think you will benefit by reading Mr. Jacobsmeyers article. In the event you have some concerns about being compatible with the "new technology" while still using VHF or UHF, you may want to check out our own comments at www.info4u.us/InterOpPlan.pdf.

The main thing to remember when someone tells you that you have no other options is that you DO always have other options beginning with the first one of rejecting the comments of the one telling you that is their way or the highway. There is always more than one way and we might just be able to help you decide the right way to go! Give us a call at 205.854.2611 for an assist - any time, 24/7.
Posted by at 10:57 AM

As we get closer to mandatory FCC narrow banding for 2-way radio systems, the questions are starting to come with increasing frequency (pun intended for those who understand such things). So, we thought it was time to provide some straight answers about FCC licensing requirements for narrow banding.
One of our customers was told that there was no requirement to modify an existing FCC license when he switched from wide band to narrow band. Another was told that he would have to purchase new equipment to operate on narrow band. Still another was told that a radio system expressly designed for 12.5 Narrow Band operation could operate at 6.25 kHz Very Narrow Band, and the list goes on.......
Rather than contributing to the rumors, we decided that it would be a service to those we serve if we got the straight answers from the people who are in the know. We share their comments at www.info4u.us/Narrowband_FAQs.pdf along with a few of our own. We hope you will find this information to be useful, and as always, we are here to serve YOU!
Posted by at 7:12 AM 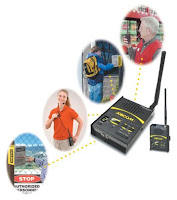 Wireless communications systems provide enhanced SAFETY, improved EFFICIENCY, and LITIGATION AVOIDANCE. The heart of the system is an efficient and affordable calculator sized 2-way communications device known as the Jobcom Base (See www.youtube.com/watch?v=KvpvcoowqlM for a short video describing this unique product).

The Jobcom MURS base station, shown at the left is a popular alternative to portable radios in hospitals, manufacturing plants, and schools with the capability to communicate with portable radios, gate control systems, integrated Public Address Systems, and wireless sensor reporting devices with no FCC license required!

One of the lesser known applications for the MURS Jobcom station is that of a wireless Intercom for schools. With a nominal price of $299, the Jobcom base is a simple and affordable alternative to wired intercom systems since there is no installation cost. Just plug it in and it's ready to go! Each "station" has the ability to communicate with the office, with other Jobcom base units, or directly to and from supervisory portable radio units. See www.info4u.us/jbs.pdf

Each classroom unit has individual, group, and all call capability. This provides flexibility far beyond wired intercom systems with unrestricted access to assistance of any kind when required at the touch of a button. The Jobcom base station can be either wall mounted or placed on the desk of the teacher as desired.

In outside areas or hallways, we offer the LoudMouth PA (See www.info4u.us/loudmouth.jpg) in two different versions Both models are available for license free MURS use or on traditional VHF or UHF licensed frequencies. The LPA model, priced at $597 can be connected to a standard wired system to provide access and control from the Jobcom base or most portable 2-way radios. The LM model, priced at $698 is supplied with a high powered amplified speaker for outdoor areas or areas not connected to an existing wired intercom.

As you can see, the Jobcom base wireless intercom system is not only an affordable and efficient alternative to traditional wired intercoms, it has significant enhanced capabilities as well. We have listed just a few of the additional capabilities available with companion products. We can also use the Jobcom MURS base station in association with sensor monitoring of entry, fire, or HVAC monitors as well as remote control of doors or gates.

The Jobcom base station is compatible with most VHF or UHF radio systems with both unlicensed MURS VHF as well as licensed VHF or UHF models also available.

Doing things better, faster, and different is what sets us apart from our competitors. If we can be of service in any way, we are as close as your phone at 800.489.2611 or by email at ServingU@falcondirect.com. We'll be looking forward to hearing from you! 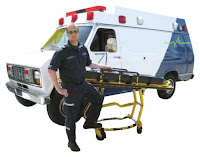 Helping you get the call, getting you there, getting your patient to treatment and keeping you out of harms way. That’s what we do. Here’s how we do it!

If you are outside the vehicle and having problems with portables that can’t answer the call, we’ve got a vehicular repeater to extend the talkback range of your portables. It’s just $995 for VHF or UHF! More information is available at www.info4u.us/I-Box.pdf.

If you would prefer to receive your alert calls on a pager, we offer the brand new WatchDog voice monitor pager at a low introductory price of just $349! Additional information is at www.info4u.us/WatchDog.pdf.

Want to get your calls and talk on your 2-way radio from anywhere in the USA on your Blackberry or I-Phone? We can show you how to do it. With out EXTender system, your PDA becomes your pager, your PDA, and your 2-way radio. See www.info4u.us/EXTender.pdf.

Need directions to the scene? No problem if you have our new CoPilot Drivers Aid system. When you get there, CoPilot can give you instant coordinates at the push of a button. It’s just $599. Add a cellular data package for $38 per month or $360 annually for instant messaging and free CAD software. More information is at www.info4u.us/CoPilot.pdf.

Nobody wants to talk about it, but on the way to the scene or hospital, you could become involved in an accident. We offer an efficient and affordable vehicle camera system that may keep you out of court or increase your chances for winning if you do have to go. It’s great for administrative use too! It’s called an Ambucam. Prices start at UNDER $1000. More information available at www.info4u.us/AmbuCam.pdf.

Need to talk on your VHF radios to UHF radio users? We’ve got simple and affordable solutions. We can even talk VHF or UHF to 800 MHz radio systems! A complete report is available at www.info4u.us/InterOpPlan.pdf. This is information you’ll find nowhere else except from your friends at Falcon Direct – Candice and Joy! Call us at 800.489.2611 if we can be of service in any way!

New WatchDog pager is now available from Falcon Direct! The WatchDog is the alerting voice pager you've been waiting for! It's light (just 3.70 ounces), Rugged and loud (750 mW - more than most portable radios!), reliable (with a 2 year warranty versus 1 year for other pagers) and it can decode up to 15 different tones per channel!
Speaking of channels, you have a choice of 1, 2, or 5 channel models with a variety of scan modes plus a message record/playback option, an alphanumeric time/date message stamp display, simple operating controls, and it uses readily available AAA batteries - available in both alkaline and rechargeable versions. Want to know more? Check out the new WatchDog at www.info4u.us/WatchDog.pdf or give us a call at 800.489.2611.
Posted by at 9:23 AM

As many of our readers know, the trend from analog to digital is no longer a forecast for the future. It is happening right now in commercial, institutional, and governmental 2-way radio communications (Additional information is available at www.icomfuture.com).
What many of our readers may NOT know is that the Sprint-Nextel iDEN network is essentially based on analog technology. As we increasingly expand the applications for handheld devices, there is a growing need for speed and bandwidth to accommodate data usage. The iDEN system is typically limited to usable data speeds of 4800 to 9600 Kilobits with a reported 14.4 Kilobits maximum, whereas today's data capable phones and radios can handle speeds in the MEGABIT range.
Many financial and industry news sources are reporting that iDEN technology is not likely to survive beyond 2012. Even if the technology remains beyond 2012, you can generally assume that as consumption goes down, costs go up and it's no secret that Nextel subscribers are moving to more advanced technology in ever increasing numbers. In the meantime, Sprint is denying the abandonment of the Nextel PTT system. For additional information, please see: http://urgentcomm.com/networks_and_systems/commentary/sprint-p2t-reversal-20091202
Big system users, in particular, those who have large numbers of Nextel radios on single site facilities (hospitals, manufacturing plants, etc.) can benefit from new connectivity technology. One of the new offerings is known as The EXTender, a device which provides connectivity between the Nextel network and conventional 2-way radios.
Our new SiteBASE server can provide a bridge between Nextel and virtually any 2-way radio system for under $1,500 (excluding associated radios)! The SiteBASE system can connect virtually all brands of 2-way radios, conventional or trunked radio systems, and any frequency band including VHF, UHF or 800 MHz. More importantly, the SiteBASE system can optionally link PCs and many PDAs to provide direct computer or PDA connectivity to Nextel's to or from any location in the world!
For additional information, just give us a call at 205.854.2511.
Posted by at 7:37 AM