Over the years, we have seem competitors at their best and their worst! Being in business today is a lot tougher than it used to be.  With over 50 years under our belt, we have come to understand what others will do to "get the business".  In order to explain our way of doing business, we would like to recount a few events that may help you understand who we are, what we do, and why we do it!

One of the earlier examples began with one of our Motorola competitors telling our customer that there was no reason to get a quote for MotoTRBO radios from us since we had to buy from her…..

This was followed by one of our Internet competitors alleging that our company was a “one man band”, unlike their very large, proficient, and professional organization followed by one of the most incredible acts of arrogance we’ve seen in a long, long time. It seems that a large automobile manufacturer offered a large quantity of “retired” radios for sale at a good price to a local hobby group. The radios were password protected which we discovered when they brought their radios to us for reprogramming. When they requested the password from the original servicing dealer, he insisted that he be paid $500 for the password, and then only if he was paid three times the amount for reprogramming that we were going to charge. We think these actions are worthy of comment.

Relative to our being required to purchase from a Motorola dealer that has never won a Pinnacle award who hasn’t been a Motorola dealer half as long as we, we can only say that in the long run – lying, cheating, and deception have their own reward.

As to being a one man band, it is true that Falcon Direct is under the strong leadership of a single individual. However, that does not mean that there are not other team members of equal importance. They may not be as visible, but they are just as important, each one selected to be a part of a company that operates more like a family than as a business. If this makes us inferior to a company that will not even publish the names of their principals, then we must be guilty as charged – and the band played on!

As to our peer (which actually isn’t the case), who chose to punish a user that committed the unforgivable act of choosing a service provider closer to home, we can only say that there is a price to pay for such action. The customer was not hurt. We were not hurt. Motorola was hurt since this company acts as their representative. Unprofessional, vindictive business practices reflect on everyone concerned. That’s a shame. We hope the moment of assertion of power by the servicing dealer was worth it – they will never be given a similar opportunity by this group of over sixty individuals involved in various enterprises, or anyone they know, again.

In conclusion – we are not the biggest in our industry, probably not even the most qualified, and occasionally (maybe even more often), we totally foul up. But – you know what? We don’t have to make it in the marketplace by putting others down, lying, or threatening our customers. We just do the best we can – working together, with our customers, and with each other. None of us is anywhere near perfect. We’re more like Hogan’s Heroes than the legions of Caesar, but we enjoy what we do – serving others and each other. We know it’s not like others conduct business, but we’ll just keep on doing what we do, as best we can, for as long as we can!
Posted by at 5:38 AM

Hardly a day goes by that we don't get a call asking why an FCC license is required for operation of 2-way radios. In the briefest possible explanation, let's put this way. With the exception of low power garage door openers and similar devices, 5 watt CB radios, half watt FRS radios, and two watt MURS radios - the operation of 2-way radio requires a license.

Why is this so? Well it's like this - the Federal Communications Commission (FCC), as authorized by duly elected members of the United States Congress, says so, and they have the enforcement authority to back up their demands. They can fine you up to ten thousand dollars per day, take away any licenses you may already have and prohibit you from ever getting any type of FCC license - even put you in prison for up to ten years!

Don't take our word for it, and whatever you do, don't take the advice of some discount store clerk or sales representative that says a license isn't necessary or that you can use GMRS channels for business, or that you are "covered" by the license of another user. The one solely responsible for compliance with FCC rules is YOU!

There are basically three kinds of licenses - those for personal non-business use (GMRS), licenses for taxpayers (commercial enterprise), and licenses for tax exempt entities (government). Contrary to what the store clerk or Internet customer service representative with Bimbo Radio Sales may say, there is no such thing as a license free UHF "color dot" frequency, license free "Business Band" or GMRS channels available for business use with no license. You cannot operate under the authority of someone else with a license unless (a) you qualify under the same FCC eligibility requirements as the licensee, (b) you agree to the same terms of use as authorized to the licensee, (c) the licensee is authorized for a sufficient number of operating units to cover the number of radios you will operate under the licensees authorization, and (d) a written document exists between you and the licensee specifying the terms of the agreement.

By the way - the fact that others may be operating radios without a license does not relieve YOU from your responsibility with the FCC. Don't put it to the test - you won't like the outcome!

Speaking of requirements, there is another FCC requirement for licensed users. Every properly authorized user is assigned a call sign (just like a Radio or TV station). Every licensed user is required to periodically transmit their FCC call signs (just like your local Radio or TV station). As a 2-way radio user, you may announce your call signs at the completion of each conversation, or utilize an automatic station ID with your calls signs sent in Morse code every half hour or so. Some base station radios have this capability built in as a standard feature. External devices are optionally available at moderate cost.

While we're at it, we should mention another topic than can evoke the wrath of the FCC. Your license (once you have one) defines an area of operation, specified locations for fixed stations, authorized maximum power, bandwidth, and mode of operation (analog, digital, etc.). Operating your radios in excess of any of this defined limits is called a violation. Violations carry potentially significant penalties. To avoid such penalties, abide by the rules and all will go well for you.

To avoid a visit by gentlemen in dark suits, with badges, and driving black Fords, may we suggest you do the right thing and get a license. It will cost you a little money for preparation, coordination, and filing (with the exception of GMRS, which you can do yourself). There will be a little wait for processing, but once approved, you are good for a ten year renewable authorization. The cost will vary depending on whether your use is commercial or governmental, but for a budgetary figure, assume an average cost of $500. We'll be glad to assist. Just give us a call at 205.854.2611 or if you would like to check directly with the FCC, call 888-225-5322, or email fccinfo@fcc.gov.
Posted by at 7:38 AM

Sometimes we have something to say that has nothing to do with business at all. We call these "Personal Comments". We like to share ideas, humor, and commentaries on a variety of subjects. Art Lesson is a Power Point presentation that falls into this category. We never understood art (still don't), but we can appreciate beauty in all forms. We were recently sent copies of a series of paintings by Van Gogh accompanied by a musical narrative. Check it out at www.info4u.us/78945-VanGogh.pps. We loved it and think you will too!
Posted by at 6:47 AM 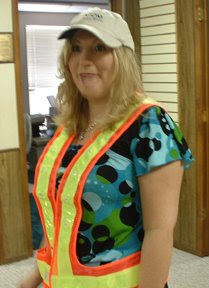 We decided to do something a little different at the recent Alabama Volunteer Fire Association Conference in Tuscaloosa. We really did things up right with great offers, super pricing, special products - even free safety vests and ball caps.
We had a great time - even took a picture or two, and Candice Sutterlin left a lasting impression for all who attended (That's her on the left).
You've got to have a little fun in business - don't you? Believe it or not, we actually sold some stuff! Want to know what we were offering? Check out www.info4u.us/FreeStuff.pdf.
Posted by at 6:38 PM

Until recently, there was only one technical standard for digital radios that allowed multiple manufacturers to produce radios using common technology. That standard is known as APCO-25 or simply P25. It's a little pricey but prices are coming down as all federal agencies standardize on this technology.

There is another open standard used worldwide known as TETRA. At this time, it has not been licensed for use in the USA. A third standard, commonly known in Europe as DMR (MotoTRBO and Hytera in the USA) is offered only by Motorola domestically. That left the consumer with rather limited choices until the announcement of the NXDN standard jointly developed by ICOM and Kenwood.

On July 7, 2008 - The Chair of the General Meetings of the NXDN Forum announced that eight members have jointly established the NXDN Forum, with membership consisting of ICOM, Kenwood, Aeroflex Wichita Inc., Daniels Electronics Ltd., Ritron Inc. and Trident Micro Systems.

The aim of this group is to develop the efficient use of frequencies through digitization. Unlike the analog FM method, interactive communications by the digital method would not be possible without the standardization of specifications. The above-mentioned eight members have jointly established the NXDN Forum for he purpose of promoting the NXDN protocol in the Americas and contributing to the development of spectrum efficient digital communications produced under an open network standard.

The result will be, in our opinion, the defacto standard in the USA as increased emphasis is placed on this technology at the manufacturing level resulting in significant technical advances and lower user cost. Digital is coming, and it's coming VERY quickly. Stay tuned!
Posted by at 7:41 PM