A Special Message for College and High School Football Coaches 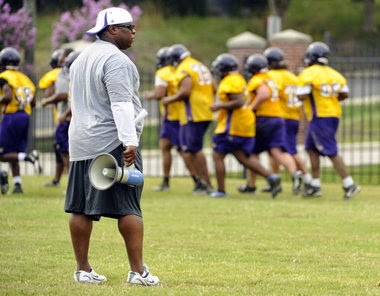 Miles College Coach Reginald Ruffin had a problem.  Just a few weeks before the first game of 2014, he found that his sideline communications headsets had been damaged beyond repair by a water leak in the equipment storage area.

The old communications system had to be replaced before the first game against rival Shaw University on September 6th. Coach Ruffin had several concerns. First, he needed something that could withstand the elements better than his old system. Second, he needed to be sure it could be delivered in advance of the first game.  Third, he wanted a system that was easy to set up, secure from monitoring, capable of providing loud and clear communications, with no possibility of conflict with another system, even one by the same manufacturer.

As it turned out, Falcon Wireless, newly authorized representative of Multi-Voice Radio (MVR), was located in the local area. A demonstration was quickly arranged, and delivery expedited to assure the Miles Golden Bears the best chance possible to be victorious in their opening game. And just to be sure, Burch Falkner, President of Falcon Wireless Direct, will be at the game to make sure that everything goes well.  We can do the same for other football team coaches as well. Just give us a call at 800.489.2611 to put us to work.  In the meantime, additional information is available by clicking here!
Posted by at 6:21 PM