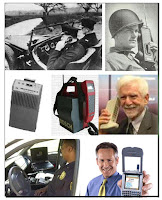 Got a call from a Sheriff the other day who commented that his communications budget was rapidly approaching the point of exceeding the vehicle operations budget and if things got any worse, it might even surpass manpower!
We know he was kidding (hopefully) but his concerns were valid.  Communications used to be a radio in a car.  Now it is a radio in the car and on the officer, both of which are subject to mandatory narrow banding.  He had been told that when he makes his narrow band conversion that his communications range will be reduced and the only solution is to convert to digital.  If that isn’t enough, the folks with the grant money are saying that anything they pay for will have to be interoperable (whatever that is….).
The State is telling him that he has to go paperless in submitting incident reports, and of course if doesn’t submit reports, he gets no recognition (or funding) from the State.  To accomplish this, he has to put computers in his vehicles and these computers should have the capability to be connectable to the Internet.
His radio people tell him that data speeds on 2-way radio are too slow for Internet connectivity as do his cellular suppliers, in particular those with Push-To-Talk (PTT) service.  That PTT thing was a bit of a sore spot since the only reason he put in PTT phones was for the purpose of getting personal 2-way radio service in areas not within the service area of his 2-way radio system. Over time, the cost of these PTT cell phones doubled, and the cost is still increasing while the quality of service is actually diminishing!
To make his vehicular laptop computers compatible with the Internet, the Sheriff is now faced with either building a WiFi broadband system (a very expensive proposition) or paying monthly service charges for cellular air cards at a cost roughly equal to that of his cellular phone service (i.e. DOUBLING recurring cost!).
Then the 9-1-1 folks tell him he needs GPS tracking so that the CAD (Computer Aided Dispatch) system can make dispatch operations more efficient.  This means adding even MORE recurring cost along with the cost of pagers used for administrative purposes.  The pagers are a special problem as service charges increase while coverage decreases.  This situation, he is told, is the result of fewer paging users.  He said that didn’t make him feel any better….
His Patrol Commander tells him that they need to improve communications security through the use of encrypted voice communications or acquiring equipment and services capable of operating in a text mode with individual, group, or departmental selective capability.
He told us that his recurring communications cost was running close to five thousand dollars a month and he was just wondering if we could give him an assist for improving his capabilities while simultaneously REDUCING his cost.
The answer is we CAN and we WILL, both for him and for YOU!  If you would like to know how, just give us a call at 205.854.2611.  If you prefer, just drop us an email to AtYourService@falcondirect.com.
By the way - That picture at the top is a condensed 75 year history of wireless communications starting at the top left and advancing to the bottom right.  We've been there the whole time!
Posted by at 10:06 AM