Which FirePager is right for YOU? 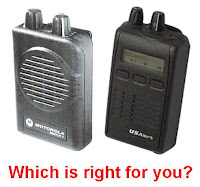 In June of 2010, we reported a Minitor V battery retention problem that forced a production shutdown for approximately one month (Click here for details). We later learned that the alleged “fix” involved nothing more than inserting a shim to force a tighter fit rather than correcting an apparently defective case mold.
We now understand that another Minitor V voice pager problem has been reported.  This problem presumably has to do with a 455 kHz filter that fails shortly after the standard one year warranty.  We are not implying that this was a purposeful act of planned failure, but it appears to be the result of a problem that has not been corrected.
Any purchaser of a Minitor V pager would be well advised to purchase the optional 5 year extended factory warranty as a single repair after expiration of the standard warranty will cost you around ninety dollars.  Multiply that by four years, and you could be looking at a five year maintenance cost possibly exceeding the cost of the pager!
There is a good alternative pager that does not have any such problem and it has a standard 5 year warranty at no additional cost.  It’s called a WatchDog!  Additional information is available by clicking here.
Never heard of a WatchDog?  We’ll be glad to provide references on request.  Concerned about where it's made?  Unlike Minitor V ,which is made in China by Unication Co. Ltd., the WatchDog is MADE IN THE USA!  So, if you can purchase a US made pager with more features, lower cost of operation, and less initial cost, why wouldn’t you do that?
The good news is that you can order the WatchDog pager from Falcon Direct with your satisfaction guaranteed.  All you have to do is click here to get your WatchDog on the way!
Posted by at 8:56 PM